A feast for sore eyes, Seema Kohli’s artworks are vivid depictions that build narratives of a mystical paradise through a language that is entirely her own. In the diaspora of Indian contemporary art, Kohli’s passionate depictions intertwine mythology and tradition into her artworks to highlight the beauty of life around us.

A Delhi based artist, Kohli has been experimenting with multiple mediums from painting, sculpture, video, performance and installation art since the last two decades, through which she weaves together worlds of beautiful symbols and figures inspired by spirituality, religion and tantric thought. More than an artist, she has developed a stature as a mystical storyteller whose many worlds collide across multiple mediums creating a universe of brilliantly vibrant energies in her works.

Her paintings, ranging from small to life-size canvases are intricate with extensive detailing and application of techniques that at once attract the viewer’s attention and engages them. Bright solid colours enhanced with the application of gold leaf create an element of fantasy in her works. Contrary to common perception, the presence of gold in her works stands for purity rather than ostentatiousness. 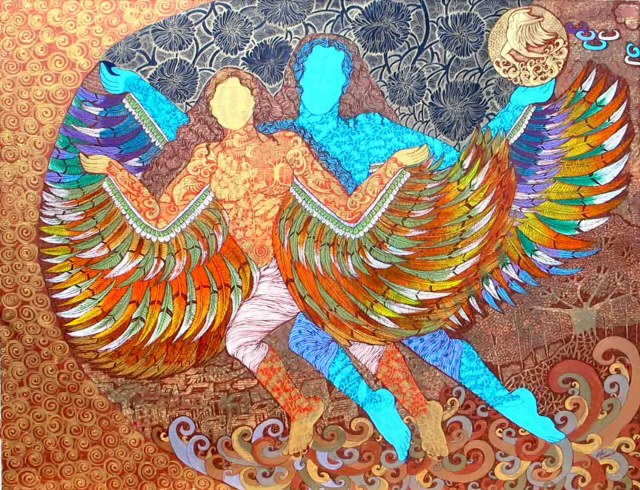 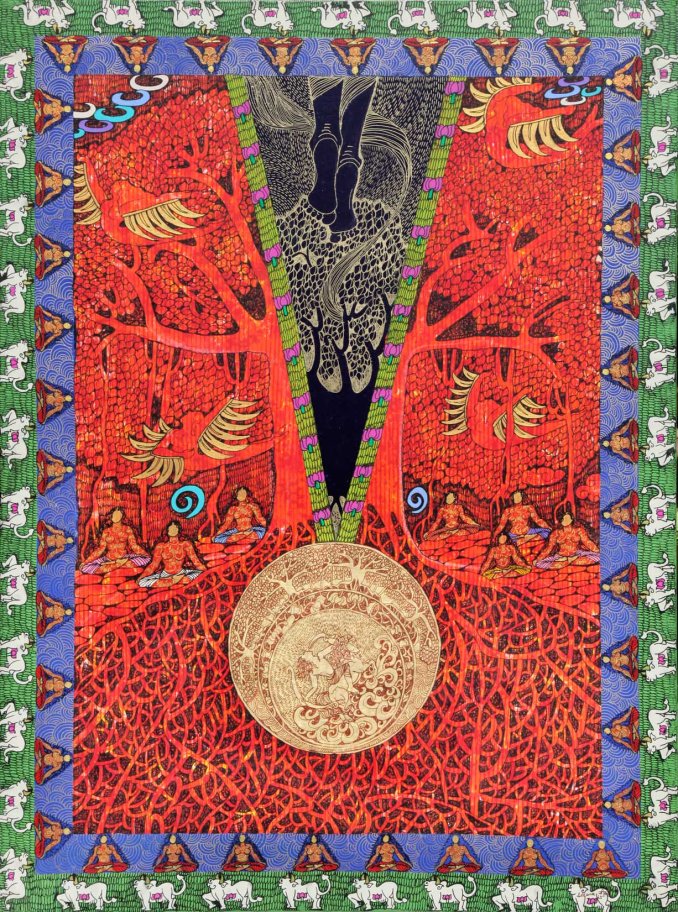 Kohli’s works can be a lot to take in for even the most avid art enthusiast. She herself admits that while she would prefer to let her viewers interpret her works as per their own unique understanding, certain concepts that frame her thinking need to be de-mystified. Key to her works is the concept of ‘shunyata’ or nothingness. Alternatively known as ‘the void’, emptiness, shunyata exists in Buddhist and Hindu canons since ancient times. It is the nothingness, which exists in everything. In other words, everything around us has the potential to spring from or revert back to nothing. This, along with procreation, feminine power and the balance of energies in the universe as yin and yang, form the basis of her works.

Kohli’s artistic expression is primarily a celebration of the female form and energy; the source of the twin forces of creation and destruction. Shakti, the divine cosmic energy manifest through female embodiment is a primary concern in Kohli’s practice. Her preoccupation with Shakti leads her to explore, engage and rediscover femininity in new and different ways.  For instance, the painting below titled ‘Myth is Reality’ was created back in 2010 and consists of five panels each depicting Shakti in various divinities and forms.  The Goddess Kali clad in white sits on the cosmos at the top of the central panel in the painting with the different colored robes flowing from the universe. According to Kohli, the robes represent our material ties that Kali entangles us with.

The middle-right panel shows the union of Purusha-Prakriti (Shiva with Parvati) resulting in the opening of the third eye or enlightenment, while directly below them is Shakti in her warrior goddess avatar seated on a lion. The middle-left panel shows the birth of Shakti from Vishnu’s navel, though traditionally it is Brahma who emerges from Vishnu. Kohli reinterprets tradition in this manner to signify the omnipresence of feminine energy in the universe. Gandharvas or flying celestial figures and the Tree of Life can be seen in the background.

On the extreme right, we see the birth of cosmos from the navel of Shakti, and on the extreme left, a tree with hanging tea cups is juxtaposed with the Banyan Tree symbolic of harmony between a contemporary interpretation of knowledge with the ancient. 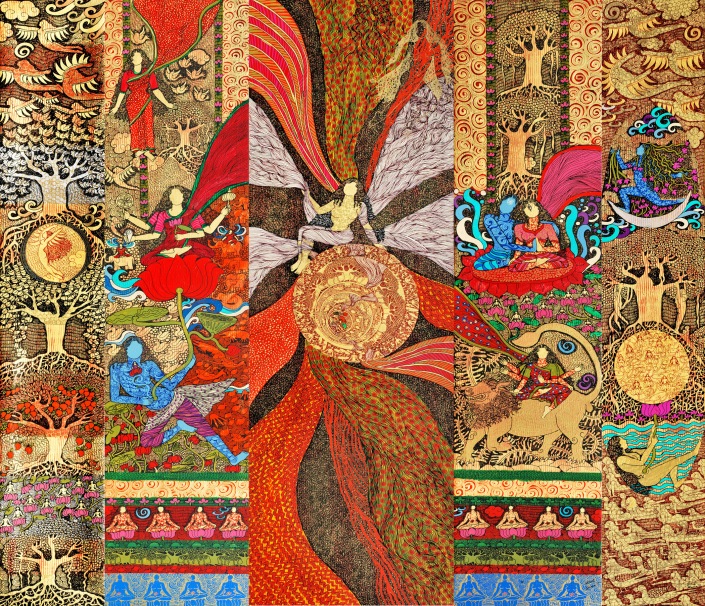 Another piece that embodies the combination of male and female principle is ‘Ardhanariswar’ – referring to the divinity in Hindu mythology that was formed by the unification of Shiva and Parvati. She chose this particular androgynous deity as it portrays the synthesis of masculine and feminine energies of the universe (Purusha and Prakriti) and illustrates how Shakti is inseparable from and equal to Shiva, the male principle of God. In ancient texts their union is considered paramount to ensure the cyclicality of births in the universe- essentially representing the womb of all creation.

In the painting Kohli places the deity in the centre, split into two equal halves on two sides of the canvas. Shiva’s side occupies the proper right, accompanied by his characteristic iconography- his trishul; his ‘vahana’ or mount- the bull Nandi and the crescent moon. Unlike traditional imagery, Parvati’s side is illustrated with multiple Shivalingas and the golden womb on the top right corner clearly invoking the power of Shakti. 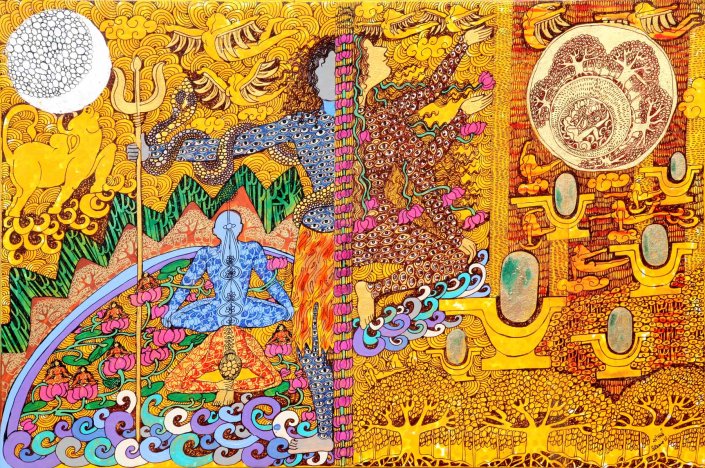 Some critics questioned her obsession with femininity as veering towards feminism, but Kohli says that while woman is an intrinsic part of man, only she was gifted the quality of procreation. She further explains the balance of male and female principles in the world as,

“…each one of us have this duality of having both sides of gender, the male and female within us. There is no difference between a man and a woman, we have those aspects in ourselves, the anatomical differences are only a part of the picture but the essence is the same, the qualities of humanness are the same but when they are enhanced they become either a woman or a man.”

Religion as an influence

Armed with a lifetime’s exposure to different faiths, Kohli grew up with a holistic overview of religious teachings. At a very early age she was introduced to verses from ancient Indian texts such as Vedas, Upanishads and the Bhagwad Gita, because of which religious symbolism is a permanent component of her works.

“When I was growing up, I had close interactions with my grandfather, who was a spiritual man,” said Kohli. “Being Hindu was not a limitation for him. He studied the Quran and told me stories from Sufism, Sikhism, the Upanishads and the Vedas. There were dialogues all the time. It made me wonder who I am, it also made me go on to do a BA (Hons) in philosophy. Later I embarked on a journey to express what I gathered, so I started drawing.”

She re-interprets popular stories associated with Krishna, Shiva-Shakti and Vishnu among other gods in her mixed media works which make them easily relatable for the viewers. If you are looking for an exciting way to learn about stories in Indian mythology, Kohli’s works should be at the top of your list. The visual imagery is enticing and makes for a much more appealing alternative to reading texts.

In a recent interview, when asked about her process of developing an artwork, Kohli describes it as a spiritual experience in itself that builds from a journey into the self-involving a larger interaction of the self with the spiritual cosmos that each one of us inhabits.

Unlike many other artists, she does not visualize the final piece in advance. For instance, on her canvas she paints objects, divinities, flora and fauna as and when they appear in her consciousness. Each work usually takes about three weeks to complete, during which time she is blissfully devoid of any predetermined visualisation of the final piece. Explaining the process she says,

“I start with a prayer invoking the gods, because I feel that I have never dictated anything and I can’t dictate the canvas. The prayer keeps me respectful of the canvas. For me each element is complete in itself, just like each element in the universe is. I don’t see my work as a whole until I’m done, so once I finish, I leave the painting on the easel for a day. When I look at it again, it is always a surprise.”

Interestingly, Kohli has never been influenced or motivated by other artists or particular artworks. Instead she hungrily feeds on that which she sees, the lives of people and things that surround her. Material objects from her daily life – ladders, bags, shirts, sofas, film strips – can be found floating amongst the trees, lotuses, eyes, fish, snakes and innumerable other motifs in her works. For Kohli, all of these are alive and all are connected.

Travelling across a constructed paradise of facts, fantasy and reality, Kohli’s canvases seem to exist in a distorted temporality that allow them to exude a sense of timelessness. Most of them emanate a meditative vibe that appeals to the viewer irrespective of the compositional context. In other words, while the themes may be concepts that appeal to Kohli on a personal level, the effect of her works remains strangely universal. They urge the viewer to enter into a calm introspective state and look within themselves, rather than focusing on the artist. Interestingly, Kohli herself realized the universal appeal in her works during her international exhibitions and projects. She claims that despite the fact that the themes revolve around Indian culture and mythology, people from other nations found a connection with her works. This reinstated her belief in the spiritual cosmos. 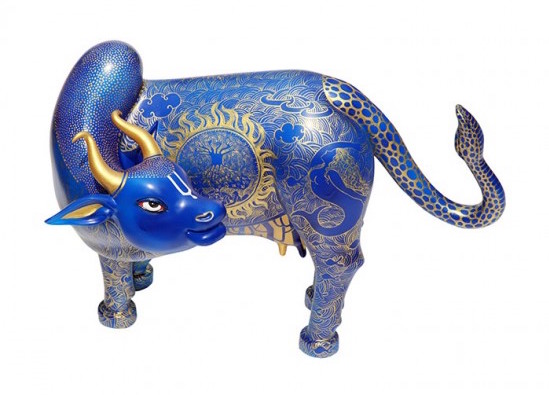 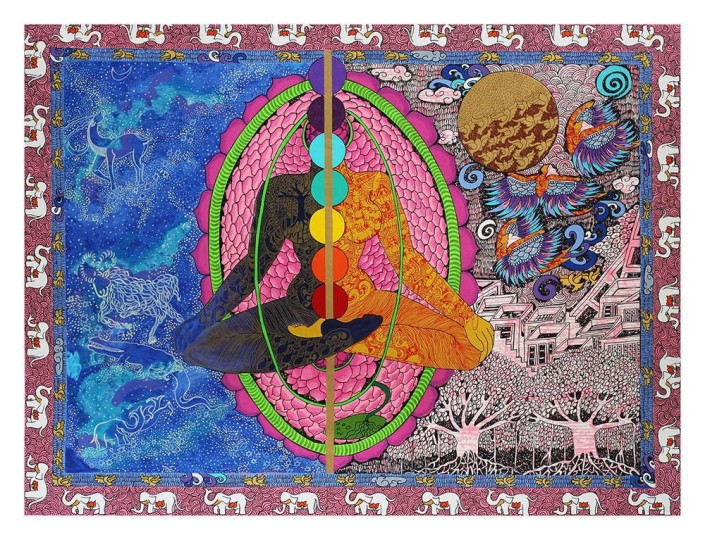 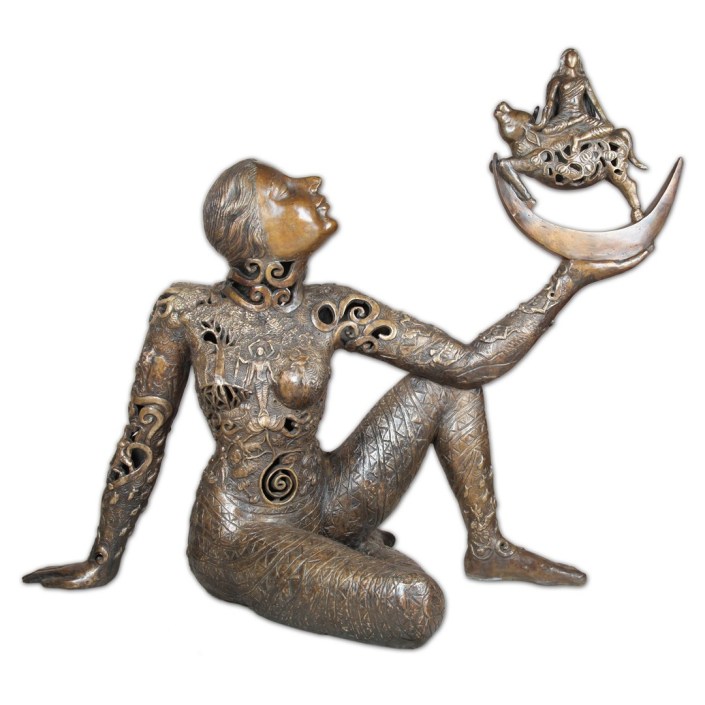 From ashes to womb to dust
Once upon a time, a long while ago, there was a womb.
A golden womb. The Hiranyagarbha.
From the Hiranyagrabha emerged the sun and the moon,
the planets and the stars, and a conscious universe was born.
The golden womb: from it emerged the five elements,
air , water, fire, earth and ether.
A universe that was neither male nor female. But as it took form, it led to the birth of Maya, or illusion.

The eternal cycles of life-death-life and liberation and the interconnectedness of all things coalesce in the Hiranyagarbha, the “golden womb” from which everything comes and which contains all things. Kohli has been exploring the Hiranyagarbha for at least a decade following a particular reading of a particular shloka from the Yajur Veda at a havan for her mother.  About the famous mantra ‘Om Vishwani deva saviturduritaniparasuva. Yadbhadrama-tanna-asuva’, she says,

“The interpretation of the mantra fascinates me. To me, it represents positive energy, which rejuvenates everything around. Soon after I read the meaning, the distinction between living and non-living vanished and everything around me began to represent life. I feel possessed by ‘The Golden Womb’, for me it is the ultimate knowledge. It represents the feminine aspect of creation and the supreme life energy which is a reflection of maya. It made things more complex and simple at the same time.”

She has created a number of series revolving around this concept and in fact continues to use the reference in her new works. 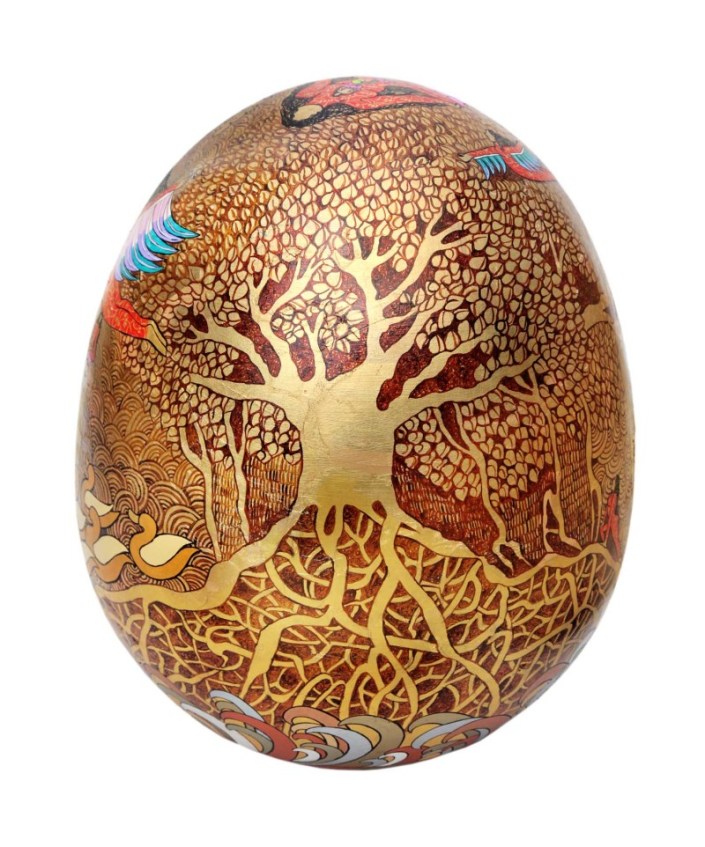 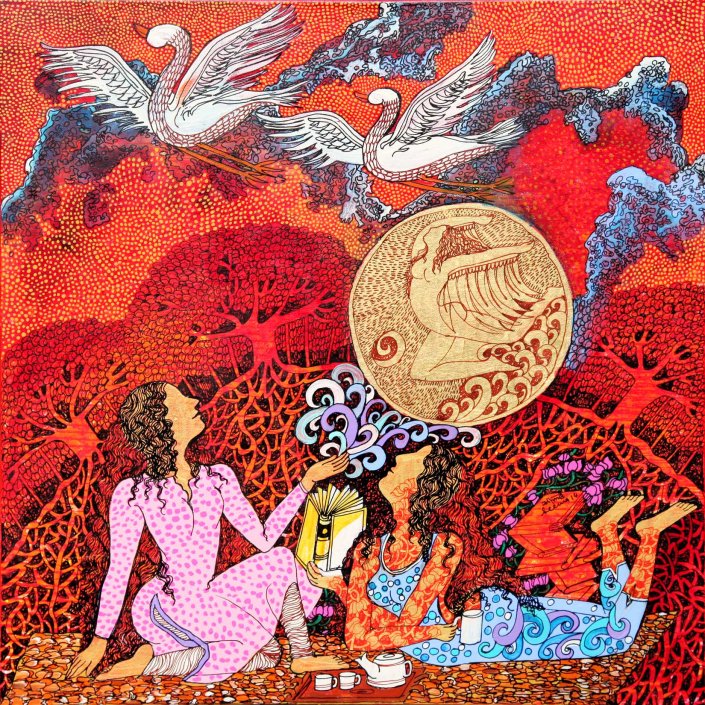 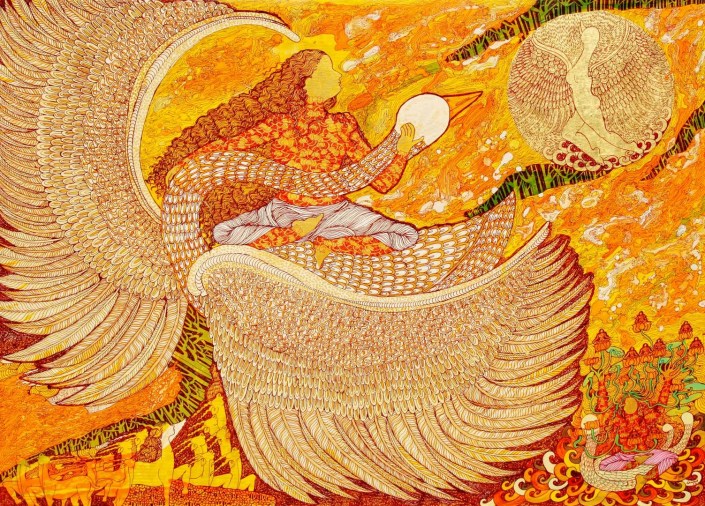 Kohli’s oeuvre has expanded considerably in the last decade or so and her mastery over such concepts as the Hiranyagarbha and mythological events from Indian culture and folklore is evident in her skillful reinterpretation of traditional imagery. She has built a massive collection of works that are reminiscent of the kind of imagery found in bas reliefs on ancient Hindu and Buddhist temples – with characters from mythology surrounded by flora, fauna and celestial figures beautifully decorated with intricate motifs.

She has had more than 20 solo exhibitions, with her drawings, paintings, sculptures, installations, installation performances and films. She has done three murals for the Defence Ministry and has done a 10′ x 100′ mural at the T3 Terminal of the Delhi International airport. She lives and works in New Delhi. 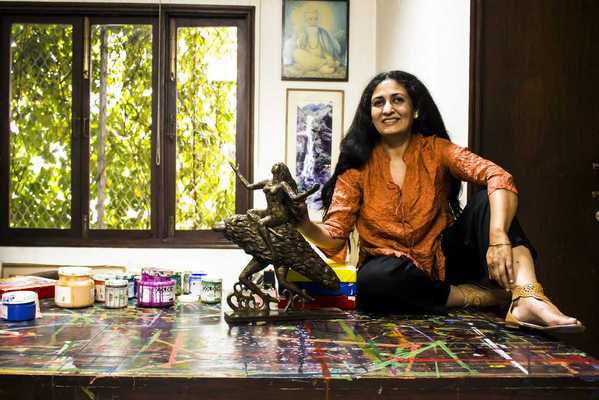